Most of the cards have now been sold, and as I'm off on maternity leave and no longer holding a stock, we've removed the web sales link. There are still some which will hopefully be available at the Scottish AGM and at the Cambridge AEM, or a few from certain members of the Welsh Committee - so if you are really desperate for some more try contacting Paul Green. The good news is, this makes the Christmas card experiment a success and hopefully it will be repeated next year - so for all you photographers out there, this is your warning to start trying to find an equally good image for next year. Perhaps next time we could even have two designs.

To judge from this year, photographs are likely to be popular if they are truly botanical images (e.g. not too abstract or landscape); reflecting the work of the BSBI (native flora); but also in at least some way seasonal/ Christmassy - but preferably original as well! Nothing like setting the standards high...
Posted by Polly at 13:26 No comments:

Unfortunately due to medical circumstances beyond my control I am having to start my planned maternity leave a little earlier than I expected - and as I am currently confined to hospital I don't think I'm going to have much of botanical interest to report!

Hopefully Paul Green, who is going to take on the Welsh Officer job for the next nine months, will have some interesting stories before long - and he will also be able to post on this blog.

In the meantime, I'd just encourage everyone who hasn't yet to think about whether they would like some BSBI Christmas cards! If you've been filling in TPP forms this year don't forget to send them to Kevin, or copy them to me/ Paul if they are electronic.
Posted by Polly at 11:26 No comments:

Yesterday I visited Prestatyn Hillside SSSI with the CCW Conservation Officer for the site, to undertake some monitoring/ mapping of Helianthemum oelandicum, hoary rockrose. We were hoping that despite the lateness of the season we would be able to tell this species apart from the closely related Helianthemum nummularium, common rockrose. In fact once we got our eyes in it wasn't too difficult, with a significant difference in the size of leaves and prostrate-ness of the plant, the presence of stipules on H. nummumlarium but not on H. oelandicum, and the more dense hairiness of H. oelandicum. The small, low clumps of H. oelandicum were fairly easily picked out even when surrounded by large areas of H. nummularium.

H. nummularium is common in calcareous habitats, while H. oelandicum is scarce in Britain and is restricted mainly to coastal areas, with North Wales being one of its hotspots. On Prestatyn Hillside it seems to favour areas around limestone outcrops, where the soil is thinner and presumably competition is less intense. H. nummularium is found throughout the site including in moderately coarse grassland where it is able to hold its own.

We were able to identify three areas with H. oelandicum, and another, steeper outcrop which we were unable to visit may well provide habitat for a fourth area.

The greatest threat to this site (which is designated for an assemblage of rare or scarce plant species) may be from invasive scrub, including several Cotoneaster species. As it is very steep and not fenced grazing presents multiple challenges and is unlikely to be a practical option, so the continuing scrub clearance which is being carried out by hand is probably the only option. Some areas of good habitat, however, would be lost if this scrub clearance (which appears to have been successful in recent years) was not continued.

This visit was one of the Merioneth Nats series and Sarah Stille will probably also write a report on her blog so mine will be brief.

We visited several different monads, starting in Gelli Grin where we hoped to find interesting base-loving flora around a small quarry, although in fact we found little. A patch of Galium odoratum, woodruff, was nice to find and a reasonable list but nothing spectacular.

Later we moved on towards Bryn Bedwog, past a lake where we found another new record of Glyceria maxima, reed sweet-grass, and also encountered some interesting wildlife during our lunch break! I still have the snout marks on my car. 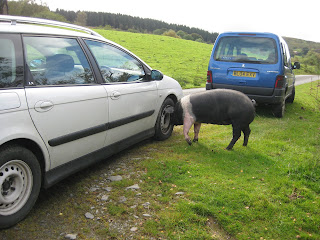 At Bryn Bedwog we headed for some crags; apparently there were old lime kilns in the area and again we were hoping for some calcareous species. We did find an interesting Hieracium which is as yet undetermined...
Still, it was a nice day out if late in the season. Its interesting to note how different some familiar species are when they are beginning to fade in autumn.
Posted by Polly at 17:23 No comments: