Yellow star-of-Bethlehem Gagea lutea is not a scarce plant in England, but is Endangered in the Welsh Red Data List - with one known native population. This population (in Denbighshire, near Llanarmon-yn-Ial) has been known for some decades. Delyth Williams (VCR for Denbighshire) and I were able to visit last week, and saw a number of flowering plants - although many appeared to have had the flowers bitten off (perhaps by pheasants?) Flowering is known to vary from year to year, but Delyth was disappointed to see fewer plants and none in some outlying patches compared to a visit she had made in 2009. 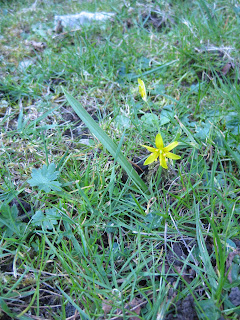 The following day Delyth phoned me again to say she had heard from her predecessor, Jean Green, of another population of Gagea lutea, not far away, near Llanfair Dyffryn Clwyd. I spoke to Jean, and today I was able to visit the site with the owner, who has known about it for some 20 years, although she may not have seen flowers every year. Only one flower, partly gone over, was visible today, but also large numbers of small narrow leaves. I think these were Gagea leaves, as where there were wider leaves present these had the characteristic ribs on the underside. However, when not flowering it is hard to be confident that the juvenile leaves are not those of Galanthus, Hyacinthoides or Narcissus, which were all present.

Interestingly, this small patch of limestone woodland has been used by a young boy who rides a toy quad bike around, and it now appears that the disturbance of creating a small track may have stimulated or exposed some seeds or bulbils, which have grown up in dense patches - and are now being protected! It appears that one of the threats may be competition from ransoms, Allium ursinum, which has been suppressed by the clearance. The owner is now talking about carrying out a little limited clearance of the Allium in places where Gagea has not been seen for several years, to see if the same process can be stimulated. 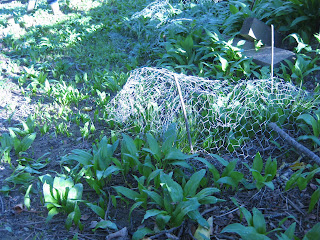 I also saw one of the most beautiful woods I have seen for a while - dominated by ash Fraxinus excelsior but with a beautiful ground flora of bluebells Hyacinthoides non-scripta, anemones Anemone nemorosa, white violets Viola odorata and wild daffodils Narcissus pseudonarcissus. It is almost impossible to be certain of the purity of the daffodils, as cultivated types have been planted around nearby houses, but it is certainly a beautiful sight. No Gagea here, although we did find some similarly narrow bright green leaves, but it seemed more likely that they belonged to the bluebells or wild daffodils. 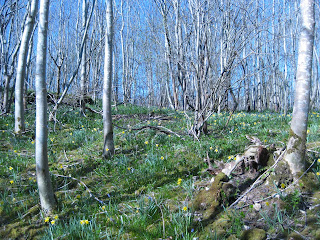 Meanwhile, Gagea lutea remains a small mystery. This brings the known populations in Denbighshire from one to two. There is an unverified record in Cardiff, and several in Radnorshire. However, it is not thought to be native in Radnorshire. There is still time in the next few weeks to visit potential sites so I would encourage anyone to go and have a look. What better place to be on a sunny March day than in a limestone woodland!
Posted by Polly at 12:53 No comments:

A walk in the gorge

Last week saw a small expedition in Radnorshire with the main aim to find and monitor the rare wood fescue Festuca altissima. This is a grass that prefers steep shaded crags and slopes in wet western valleys. Interesting, but also challenging to reach! There are several possible routes to the site, involving a choice between bashing through brambles, wading over rocks in the river (perilously just over wellie-depth in places) or balancing up and down steep and loose earthy banks. Apparently Kilvert favoured being lowered down on bell-ropes, but this would only be recommended to those with the knowledge and confidence to attempt abseiling.

Having attempted a visit in the summer, we decided a repeat would be useful in winter as F. altissima is wintergreen, and more easily counted in the absence of other green leaves. However, it remained a challenge - including an identification challenge when we questioned whether our plant was really F. altissima or the less exciting   wood millet Milium effusum. Eventually confident (subject to a final determination) we estimated over 50-100 clumps, with most scattered over one steep slope, and others scattered on ledges.

Eventually we were stopped by a deep pool and waterfall - I wonder if there could be more F. altissima on the really inaccessible slopes beyond. A major challenge for someone?