Walk with the Merioneth Nats

On Thursday I (Paul) attended a walk lead by Sarah Stille across moorland east of Trawsfyndd. It was a lovely mild day. 131 species were recorded including three clubmosses. Lycopodium clavatum (Stag's-horn Clubmoss) was found in large numbers in many places. 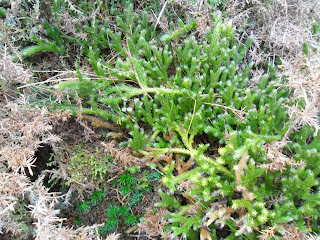 Posted by Wexford Wild Flowers at 11:18 No comments:

Catching up in Wales

I may have been out in the field less than I would have liked this summer, but it's clear that many botanists have been out and busy in the fine weather over the summer. Some of them are even writing about it online. One of our newest vice-county recorders, John Crellin (joint VCR in Brecon, VC42), has a very active blog where he reports regularly on his activity. The highlight for me was when he told me about a sighting of the very rare (and threatened) spreading bellflower, Campanula patula. How often would you find such a beauty mentioned in the same post as Himalayan balsam Impatiens glandulifera? I don't know, but luckily they were at different sites even if reported in the same week! John has not only been an active recorder this year, establishing a new local group and getting to know the county, but has also found time to share a lot of his great photos with anyone who wants to read his blog.
The less new vice county recorders have been busy as well, although I haven't caught up with them all yet, but Sarah Stille in Merioneth (VC48) has also posted a few pictures on her blog. I was interested to note she had found small water-pepper, Persicaria minor, which John had found at Llangorse Lake (this is one of John's images, from www.floralimages.co.uk). 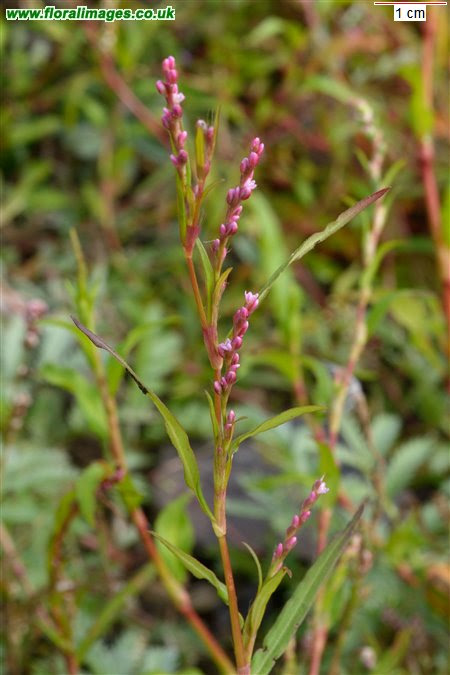 Persicaria minor is one of the BSBI's Threatened Plant Projects, which many of our recorders have been surveying across the country, as the project has come to an end this year. We look forward to seeing the results. It is also a truly tricky plant to identify, being easily confused with tasteless water-pepper, Persicaria mitis. A close examination of the seeds is one of the ways to identify them clearly, as Persicaria minor has smaller seeds, which are shiny like those of Persicaria mitis, while biting water-pepper, Persicaria hydropiper, has much duller seeds. P. hydropiper is a common species, which can also be quickly recognised by the hot peppery taste of the leaves.
This is an important week in the working year of the Welsh Officers, as tomorrow we have a Steering Group meeting and on Saturday the Welsh Committee meets. These two meetings are when we meet the greatest number of Welsh recorders, along with representatives of NRW, and we confirm our main working priorities for the next year. This year we will also be trialling the job-share with Paul and myself, so there is plenty to talk about! We're hoping to have plenty of time to respond to the needs of the vice-county recorders, and also to work with them to publish some new Rare Plant Registers. Wouldn't it be great to have Rare Plant Registers for every county in Wales?
Posted by Polly Spencer-Vellacott at 13:42 No comments:

Just a quick post to let everyone know I'm back again from maternity leave. However, there's no need to be sad as Paul is not leaving, in fact we're continuing on a job share basis working 2.5 days each average. At present I'll be working Wednesday-Friday while Paul will be doing his days from Monday-Wednesday.
Sadly I don't have a great number of botanical photos and finds to share right now. I have been getting out a bit, but usually slightly encumbered - not best for taking botanical photos or bending down to examine plants!

I'm now looking forward to getting back in touch with everyone and hopefully finding something interesting to say about botany in Wales even over the winter months. It's good to be back.

Sticking my head up in the winter season (hope you don't mind, Paul) to recommend an article on BBC news today about the spread of Danish scurvy-grass. Trevor Dines is speaking for Plantlife but he has a very longstanding BSBI connection as well.

This article is linked to the new series that is starting tonight on Channel 4 - Wild Things (8.30pm) which is well worth watching and has been contributed to by the BSBI. We'll wait and see more!
Posted by Polly at 18:45 No comments: