On Saturday I was amongst a group of botanists - apparently one of us was the 100th to participate in Chris Metherell's introduction to Eyebrights (Euphrasia).

With no prior knowledge of the genus, I was a little nervous about the course, but I was delighted to find the day whizzed past.

Chris gave us an introduction, which largely explained how to look at eyebrights - and there really is a great deal of detail. I have a much clearer idea of the distinction between upper cauline leaves and lower floral leaves, but I think I still need practice in looking at the tips of leaf teeth to discriminate between acute, acuminate and aristate! However, the new keys that Chris has produced take you through which are the most important features.

After the introduction we spent the middle part of the day (with a break for lunch) looking at various herbarium specimens - some fairly old and brown from the Bangor University herbarium, and some still relatively green from Chris' own herbarium. 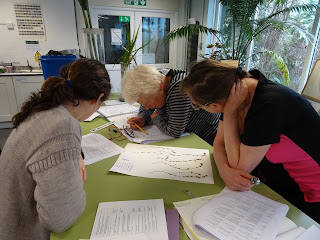 I began to really look forward to summer, when I hope to test my new-found skills in the field - and I hope that many of the characters will be much easier to determine on fresh specimens. 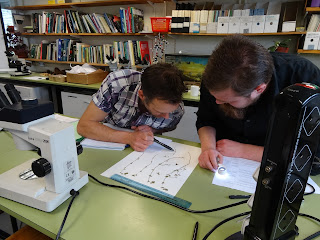 We were lucky enough to be using the teaching lab at Treborth Botanic Garden, a place familiar to Bangor alumni and locals. And this course was very much aimed at locals, with most of the participants coming from North Wales (a few from North West England). Chris focussed on the species we would be likely to encounter in Wales.

A big thank-you to Chris - who left us all full of enthusiasm - and we hope to practice our skills in the field before long. I for one am also looking forward very much to the publication of the new Euphrasia handbook, hopefully within the next year.


Posted by Polly Spencer-Vellacott at 10:58 No comments: