Despite a much less than pleasant weather forecast, I met Georgina and Martyn at Acton Park in Wrexham to begin our attempt at the New Year Plant Hunt.

The rain stayed away for a few hours; we found a number of plants around the edges of the park and the surrounding area.  Can anyone help identify this garden marigold wandering into Acton Park? 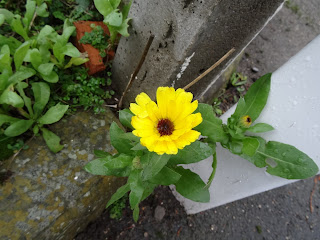 After a lunch break we decided to move on a bit to the Wrexham Industrial estate, which did indeed provide more variety; including four species of Vicia (tetrasperma, cracca, hirsuta and sativa; also Medicago lupulina and arabica) and also Euronymus europaeus. By the end we had totted up 57 species, not a record for Wales but satisfying nevertheless. The top family was unsurprisingly Asteraceae with 14 species; second place more surprisingly was Fabaceae with 7 and third was Brassicaceae with 6. We also found four grasses open and flowering (Poa annua, Arrhenatherum elatius, Dactylis glomerata and Lolium perenne). My photos are not up to much but here is a selection as a collage... 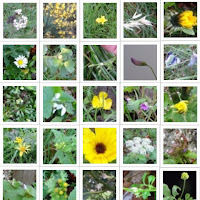 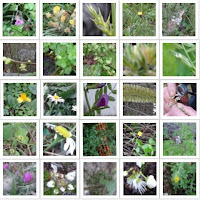 For more information or to take part in your own New Year Plant Hunt (up to the 4th Jan) see BSBI News and Views.

Other Welsh hunts have been Tim Rich with 59 species in Cardiff; John Warren with 27 in Aberystwyth, and a whopping 67 in the Chepstow area from the Monmouthshire Botany Group.
Posted by Polly Spencer-Vellacott at 09:52 No comments:

Happy New Year! Would anyone local-ish like to join me tomorrow on Saturday 2nd January at Acton Park in Wrexham for a New Year Plant Hunt? The aim is to find as many plants in flower as possible in three hours, although we could also do some general recording.

Meet at 11 am at SJ345 518. Let me know if you plan to come (if the weather is appalling we'll cancel or possibly postpone to the Sunday. I'm prepared to go in moderate weather but not driving snow or rain! Warm clothes and thermoses?

If you're not local why not have your own hunt? For more information see the BSBI publicity blog
http://bsbipublicity.blogspot.co.uk/2015/12/bsbi-new-year-plant-hunt-2016-how-to.html
Posted by Polly Spencer-Vellacott at 09:14 No comments: